This week is completely filled up with back-to-back interviews for internships, volunteer positions, casual sales assistant jobs and university lectures that are pretty much just slides of optical illusions (why?). I am exhausted already and am probably going to pass out in bed soon and awake to angry phone calls from my car pool buddies after I inexplicably press snooze on my alarm, and am half an hour late to uni (as I have been doing for the past week).

When I wore this outfit out for the first time, I was with a friend of mine, on the train. Minding our own business. Enjoying each other’s company and the general rankness of public transportation. Until our Cityrail reverie was cut short by the sudden appearance of a leggings and Nike dunks clad trio, complete with streaked hair (I shouldn’t be judging). If you asked me to guess where they put their makeup on, I’d say the kitchen. The eyeliner looked as if it were smeared on by a spatula and their mascara applied with a fork. So these three otherwise harmless younger-looking girls stood behind my friend and I, who were just basking in the scent of commuter B.O. and drunk-person spittle. And they started attacking my cape. “It’s a picnic rug. It doesn’t even fit her”, one sneered. I turned around. Calmly, “Shut up.”

“No, you shut up.” I stared at her, unsure if we had begun joking or if she was sincere. She was being sincere. Long story short, we spent the rest of the commute and part of the walk to the carpark being followed by them and getting insults hurled at us (well, mainly me). Some of the more winning jibes included: “Look at the prostitute”, and “Give me back my rug. I think you stole my rug. And you’re wearing it.” This happened a while ago but I still don’t understand how unecessary and rude people can be. The worst part was, I was trying to strut in front of them and be all, “I AM BETTER THAN YOU, I DON’T CARE ABOUT YOU”, and then my lack of coordination kicked in and I stumbled in my heels. Woops.

Regardless if this is a picnic rug or a rug from someone’s house a prostitute outfit, I adore it. I have worn it out three times and counting. The best part of it is I thrifted all of it (sans shoes) at one thrift store. When I first wore everything, I looked in the mirror and thought, “This would be the perfect date outfit.” But who needs a boy when I can take myself on dates to McDonalds. All the romance I need is contained within a McDouble with an extra chicken patty. Did I mention this dress was from the children’s bin and cost me 50 cents?

And I keep forgetting to blog about the short trip I took to the Blue Mountains with my high school friends. Taking a break from uni is one thing. Taking a break from uni surrounded by the crispest air imaginable is another. Maybe it’s because I don’t leave Sydney often, but the air up in the Mountains was the most incredible thing. Second to spending a week with the cutest kids drinking too much tea, eating too many eggs, playing poker, grocery shopping, bushwalking, drunk dips in the spa, and watching foreign Spanish horror movies. Here’s a very short collage of my time:

P.S. I am volunteering at a Canadian film festival called Possible Worlds. Take a look through the movies and come down and watch a few if you’re in Sydney. If you’re in Sydney AND Canadian, you have no excuse. 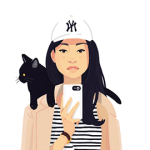